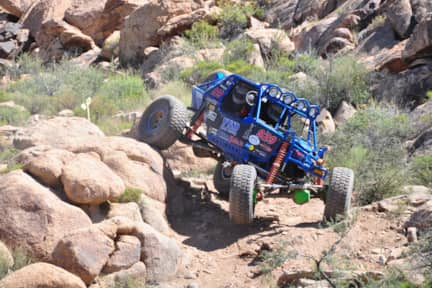 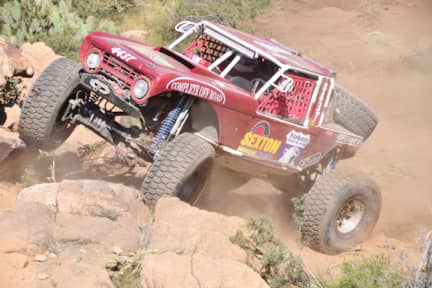 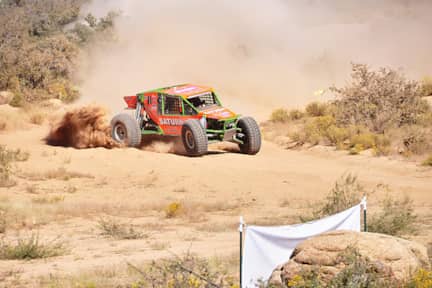 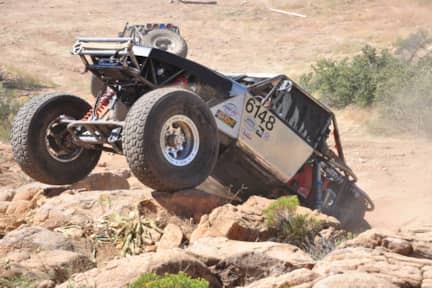 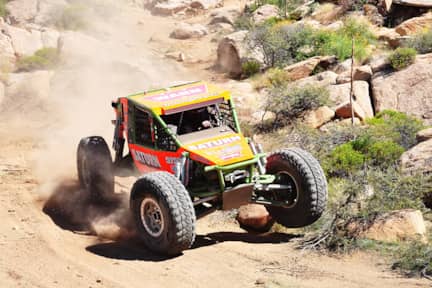 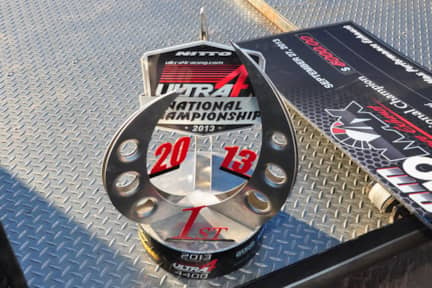 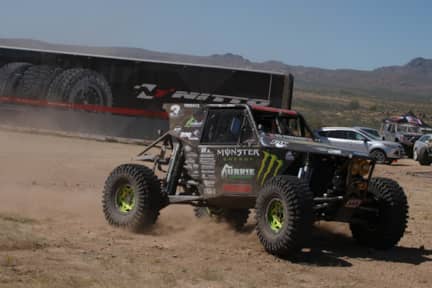 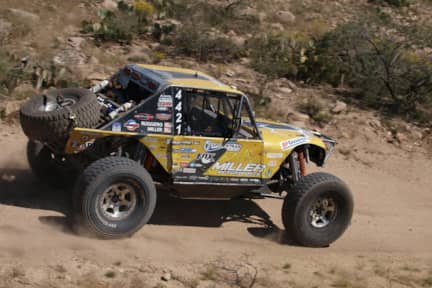 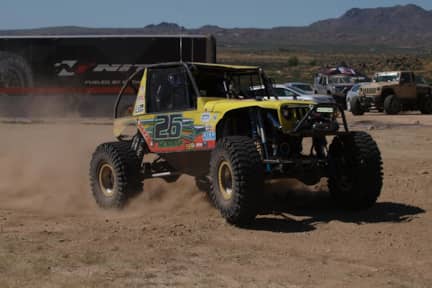 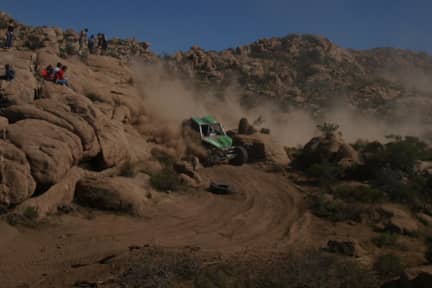 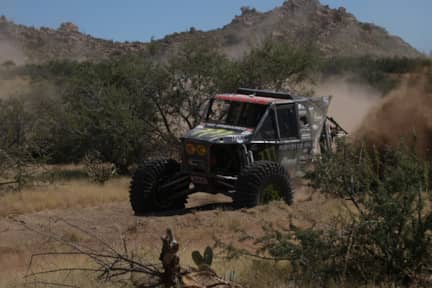 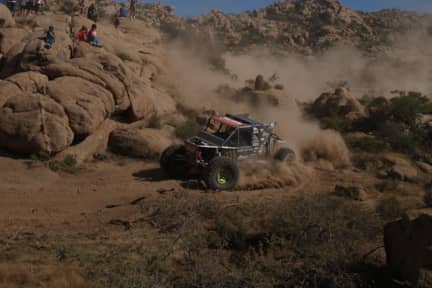 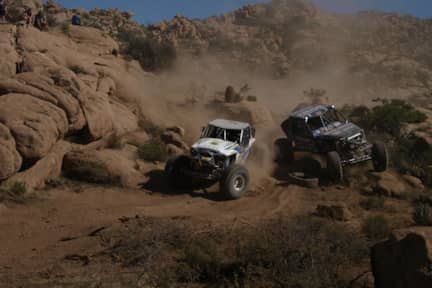 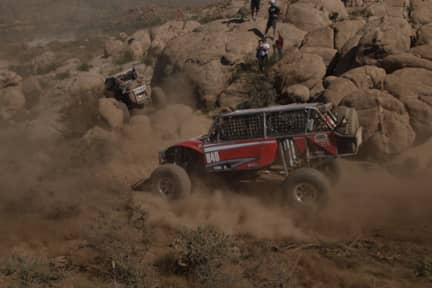 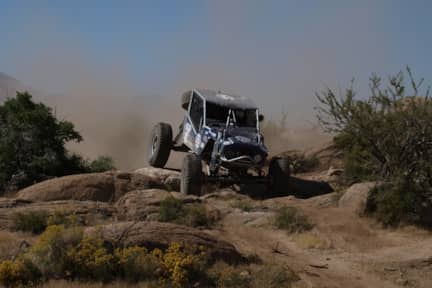 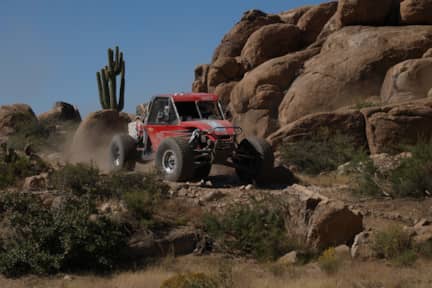 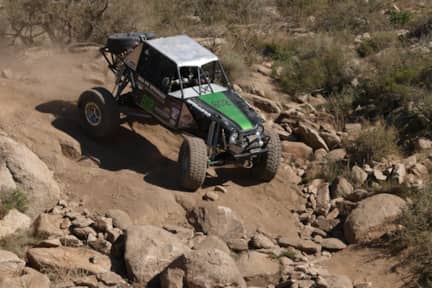 Demanding maximum performance from vehicles and drivers, the Ultra4 race series is no easy feat. The 2013 National Championship event was held this past weekend in Arizona, with Nitto racing drivers Jason Scherer and Rick Mooneyham taking respective 1st and 2nd place podiums. This event also culminated the 2013 season, crowning Shannon Campbell the overall Ultra4 2013 Champion. Without a qualifying round the day before, drivers started the race based on total season points – placing Campbell 1st, Healy 2nd, West 7th, Scherer 12th, and Mooneyham 31st. Entering the event, Loren Healy was just 11 points behind Campbell. After suffering an A-arm failure on the first lap of the race, most likely a result of a wreck earlier in the season, Healy was unable to complete the event and was out of the points competition. Healy’s Nitto teammates Jason Scherer, Rick Mooneyham, and Derek West continued on, displaying exceptional driving to overtake numerous competitors throughout the event. Held at Thunder Rock Off Road Ranch, the Championship race was a narrow course through the desert with high speed straights along with four rocky sections. Rick Mooneyham reports, "The tight path along with thick dust provided limited opportunities for passing. The TTF/NITTO Tire 554 car performed flawlessly throughout the race. Despite many direct rock hits, the NITTO tires held strong. By the fifth and final lap of the race, my crew informed me that I was in close competition for a podium finish. I began to push the car even harder." Mooneyham came in just 25 seconds behind Jason Scherer, when including Scherer's 20-second penalty that makes only 5 seconds behind 1st and 2nd! Scherer also had issues with the dust. He recaps, “We had gnarly dust the first lap; silt bed style hanging dirt dust on the 15 mile track. I stopped on the course 2 times during the race blinded and had to wait for it to settle.  I took it easy at the start, but nearing the end of lap 2 I started to pick up the pace as Shannon was getting away. Thankfully some wind developed and I was able to make passes easier. Lap three was awesome, having really mastered the course and being given the green light to push. By the 10 mile marker on lap 4 I had passed the broken down physical race leader and was slowing down to a conservative "bring it home" pace.” Scherer’s short wheelbase and 40” Nitto Trail Grappler K-Spec tires helped him navigate the tight areas. Throughout the entire 2013 Ultra4 season, Nitto racing drivers experienced an unheard of zero tire failures. Changing a tire while out on an Ultra4 course isn’t an easy job and can eat up twenty minutes of race time on average. The remarkable performance of Nitto tires helped enable Nitto racing drivers to take six first place titles throughout the year, more than any other team. Congratulations to each Nitto racing Ultra4 driver for a year of hard work and podium wins in the toughest off-road race series in the US! Click on any image below to enlarge. For more information on Nitto racing Ultra4 drivers, visit nittoracing.com. Full Press Release from Ultra4 below:

October 2nd, 2013,  CONGRESS, AZ:  With less than 300 points separating the top ten drivers in the ULTRA4 series, there was a lot riding on last weekend's Nitto Tire National Championship held at Thunder Rock Off Road Ranch in Congress, AZ.  All top 10 drivers in series points along with 38 additional ULTRA4 cars were on hand to compete not only for the win, but also for the series championship.

At the end of the day, two former Kings again stood atop the podiums.  2009 King of The Hammers, Jason Scherer, won the race while the only two- time King of the Hammers, Shannon Campbell, came in 11 minutes behind him in 8th place, earning enough points to secure the 2013 Nitto Tire National Championship. Drivers had to complete five laps of a sixteen mile desert course designed specifically for ULTRA4 cars. The course was filled with open desert and plenty of tight and technical rock sections. Shannon Campbell started the race in the pole position, while Scherer started 12th. Starting order was determined by series points with drivers starting one every 30 seconds.  The first three off the line were Campbell, followed by 2010 King of The Hammers, Loren Healy, and then Campbell's 17 year old son, Wayland Campbell who was only 77 points behind his father going into Saturday's race. Wayland Campbell was the first to take the checkered flag with Nitto drivers Jason Scherer and Rick Mooneyham close on heels. On corrected time, Jason Scherer would finish nearly three minutes ahead of Wayland Campbell with Mooneyham less than 25 seconds behind him. Scherer was penalized 20 seconds for missing an obstacle on course making the gap between first and second place less than five seconds. Ten cars equally divided between Pro Comp Stock Class and Rubicon Express Modified Class also competed last weekend.  Arizona driver Alan Johnson, won the Mod class with Shawn Rants taking 2nd place. In the Stock class, Matthew Peterson won the race in the only stock vehicle to finish the 2013 Smittybilt Every Man Challenge.  Richard Gauthier came in 2nd in the stock class and earned enough points to clinch the Stock Class National Championship. Despite suffering technical difficulties at Saturday's race, Mod driver Wayne Hartwig, had also earned enough points throughout the season and retained his lead and won the National Championship for the Mod class. Several other awards were given including ULTRA4 Sportsman of the Year, Rookie of the Year and Partner of the Year.  Sportsman of the Year was voted on by ULTRA4 Drivers and this year Shannon Campbell won by an overwhelming majority. Jake Hallenbeck won the Dynomax Rookie of the Year for his breakout 2013 season. This was Jake's first year with ULTRA4 Racing and he finished 6th in the series. Partner of the year went to Thom Kingston of Spidertrax for his continuous support of the series which included helping Levi Shirley compete in Europe and his excellent work photographing and promoting every 2013 ULTRA4 Race. The full results for the season are listed below:

Sportsman of the Year: Shannon Campbell

Rookie of the Year: Jake Hallenbeck

Partner of the Year: Spidertrax

Casey Folks of BITD Has Passed
Bombshell: An International Harvester Restomod Goes to SEMA
Uncharted Territory: What it Takes to Conquer the Rebelle Rally
The 5 Best Ford V8 Engines of All-Time

Casey Folks of BITD Has Passed

Uncharted Territory: What it Takes to Conquer the Rebelle Rally