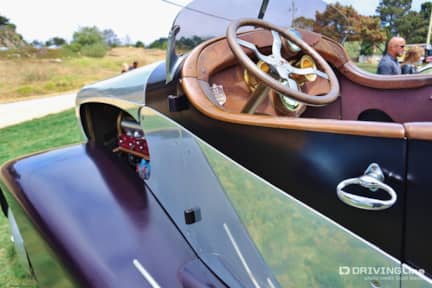 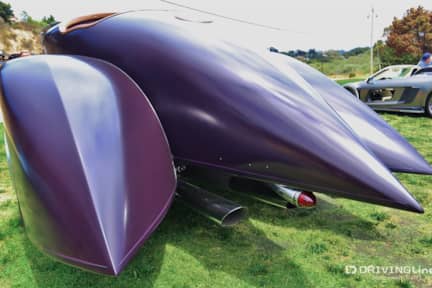 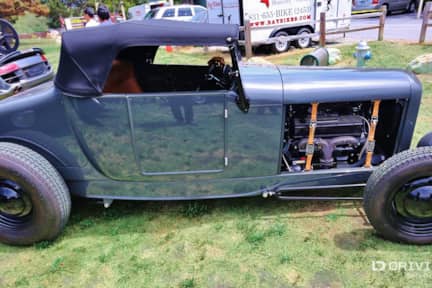 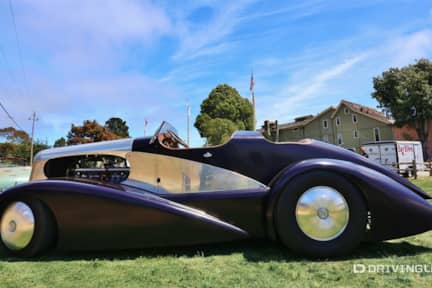 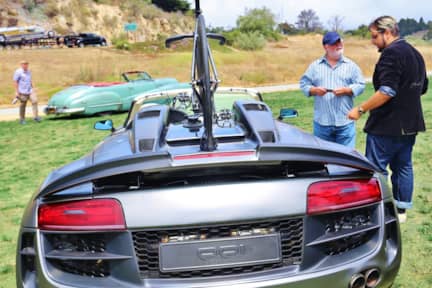 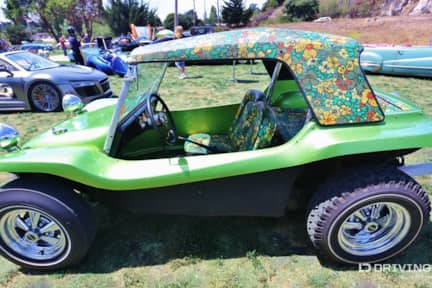 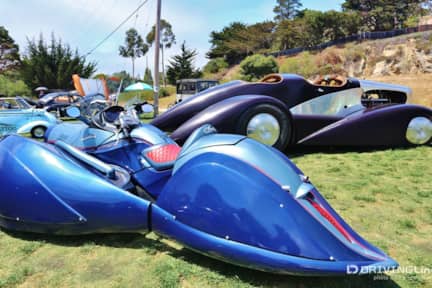 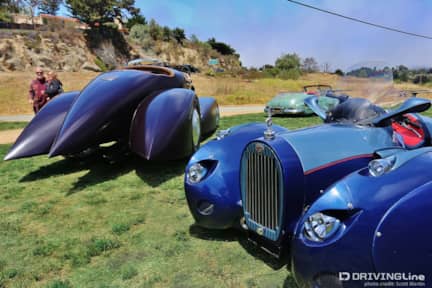 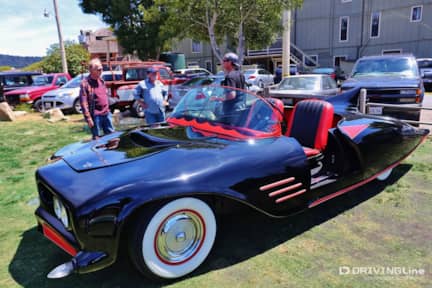 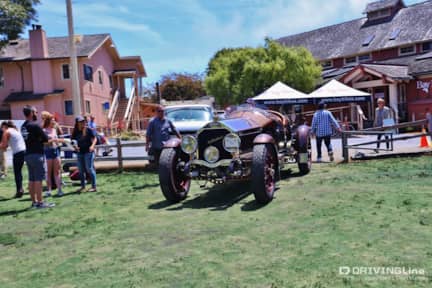 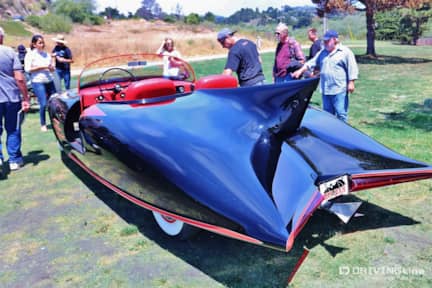 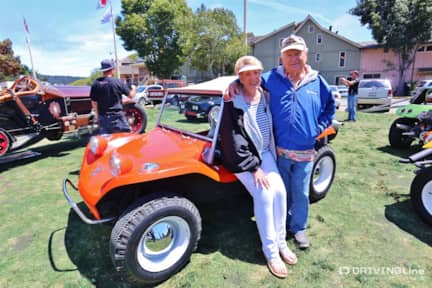 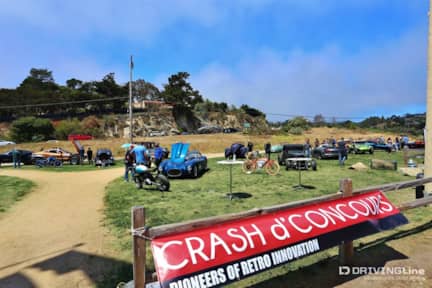 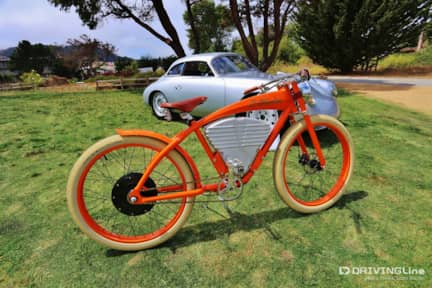 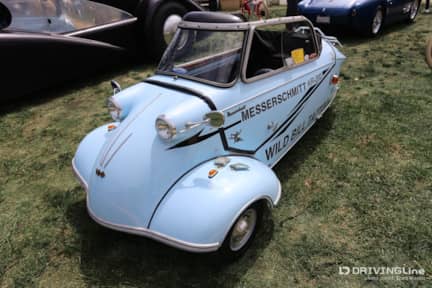 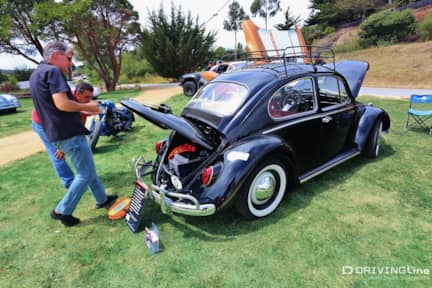 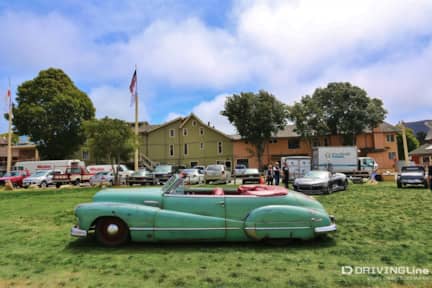 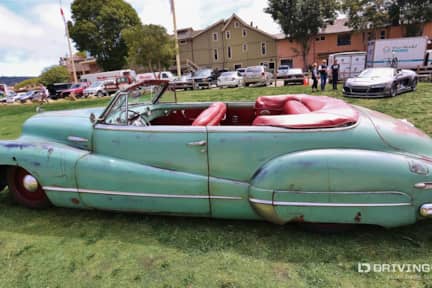 Not Your Regular Concours: "Crash d'Concours" Merges Classic With Modern

Among the newcomers to Monterey Car Week in 2014, the Crash d’Concours car show stood out as one of the most unique and innovative. The theme of the first-time event was, as stated on their banner, “Pioneers of Retro Innovation“. Some of the most avant-garde transportation conceptualists and designers originated the idea and then presented some of their creations on premises, including Jonathon Ward, Andrew Davidge, Mike Leeds and Steve Moal.

While many events during the week and culminating at the Pebble Beach Concours are celebrations of the past, Crash d’Concours pulls from those retro-inspired designs and infuses future-forward technology with retro-nouveau sensibilities. Many of the classic automobiles at Monterey are now too valuable to be driven, so this group of innovators is trying to insure that yesterday’s classics can remain or become high performance daily drivers. As Andrew Davidge says of the multiple planners and participants, “… we’ve discovered that we’re part of a growing tribe of like-minded builders who are making designs of the past perfect for today. We’re honored to be in such good company.”

The event took place at The Barnyard Shopping Village and was a little hard to find… coming down the hill from Carmel-by-the-Sea, you could see one or two of the cars plus the flags for “The Barnyard”, but it took us two tries to actually locate the show. Eventually, a huge silver trailered vehicle by Blastolene was parked on the street above the venue with a large sign attached to help people find the outdoor exhibition.

Electric vehicles were featured on the field, plus there were test drives on retro-modern bikes from the sponsoring Vintage Electric Bikes of Santa Clara, California. A collaboration with Jonathon Ward on The ICON E-Flyer 1 series already resulted in a sold-out line. Allison Sugahara of Vintage helped set up a lot of the show's logistics in conjunction with Jonathon.

The other company with an electric offering was Z-electric . I had seen one of their VW Beetle conversions two weeks earlier at the Supercar Sunday car show in Woodland Hills, California, and their CEO, David had mentioned the Crash d’Concours was being put together as a “last minute” Monterey Car Week event. He and his partner Bonnie’s philosophy is to take vehicle models of which there are a lot (for instance, 1958 to 1966 VW Beetles) and convert them to electric vehicles. The fact that you can also easily restore them back to original condition for collection and sale is not lost on Dave and Bonnie.

One well-patina’d 1950’s Buick convertible, or “Derelict” as they call it from ICON had a completely new chassis, drivetrain, electronics and even a navigation system. Designer and automotive visionary Jonathon Ward originally had the idea because he wanted a car that drove well and had all the modern drivability, dependability and conveniences, and yet he wanted to be able to throw the kids and surfboards into it whenever he wanted. Thus, the classic and many of the tricked out or totally restored Landcruisers and other vehicles that he meticulously recreates on a day-to-day basis are all ICON’s. Ward also exhibited a four-door extended wheelbase ICON FJ44.

Lark Machine Company offered a selection of cool retro-looking cycles with modern drive systems. When you go on their website, though, you can see that is just one aspect of their design capability. The organization's self-description, “Part mad scientist. Part old-world artisan.” is very fitting.

There was only one new car at the show; an Audi R8 with a Carbon Fiber body and two sets of doors… one for winter and one set with cut-outs for summer. Nick Jimenez from e-Garage also had a beautiful Ferrari-Gray Hot Rod with Ferrari-grade camel leather interior and hood straps.

Two beautifully restored 50’s “Outlaw” Porsche's from Emery Motorsports were displayed: the Speedster above was re-fitted with 2.4 Liter 912 200 hp engine going through a 901 4-speed manual transmission.

One big nod to overall vehicle design, primarily of the 1960’s, was the collection of Meyers Manx Dune Buggies including the very first one produced. As an added bonus, the owner, designer and manufacturer of the vehicles, Bruce Meyers, was there with his family to enjoy the day and celebrate the 50th anniversary of the first Meyers Manx, pictured above.

Another surprising “throwback” came in the form of a Batmobile… not from the TV show or Movie, but pre-dating all of that to a specially built car designed to promote DC Comic Books from 1963. The vehicle has been completely restored recently by Borbon Fabrications of Sacramento.

A very interesting and totally one-off vehicle with amazing attention to detail, was a Bugatti-styled 3-wheel motorcycle called “Atlantis”. It was seemingly modeled from the 1936 Bugatti Type 57SC Atlantic, one of the most rare and expensive cars in the world now housed at the Mullin Automotive Museum in Oxnard, California.

Chandler, Arizona-based Local Motors showed more innovation with their two “Rally Fighter” street-legal off road desert racers, plus they featured one of their “Racer” Motorcycles which is purported to be the world’s first co-created custom motorcycle designed through LM’s Forge community design system. There are so many great things going on with this company that you should really check them out, www.localmotors.com.

Plans are already in the early stages for the second Crash d’Concours next August during Monterey Car Week 2015. Co-planner Andrew Davidge is very optimistic that things can only be bigger and better based on the turnout and enthusiasm generated by the inaugural event. Speaking with several of the participants, they were very happy with the turnout and felt that the show was definitely going in the right direction. It sounded like the show could definitely become a permanent date on the yearly Monterey Car Week schedule!