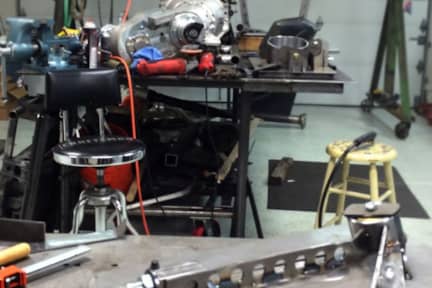 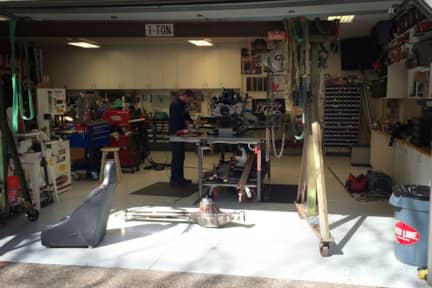 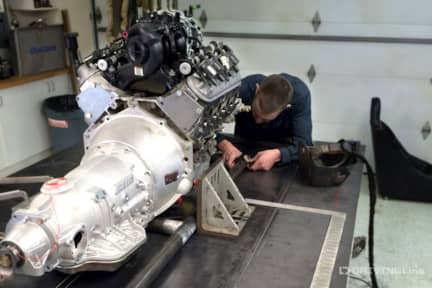 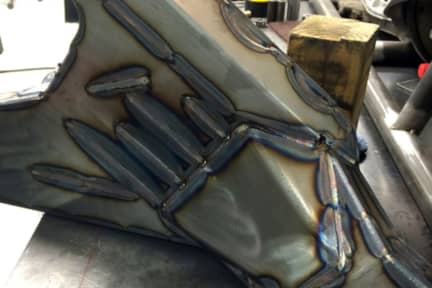 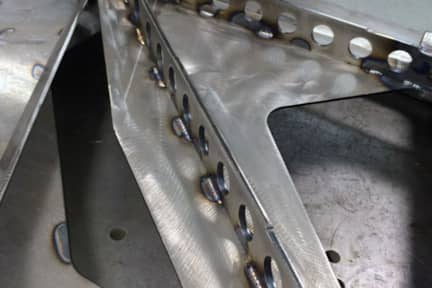 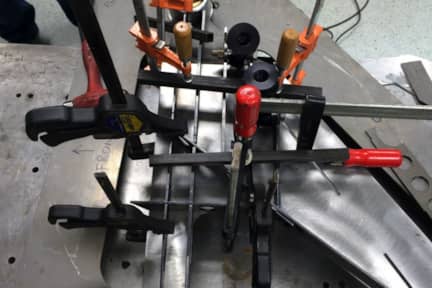 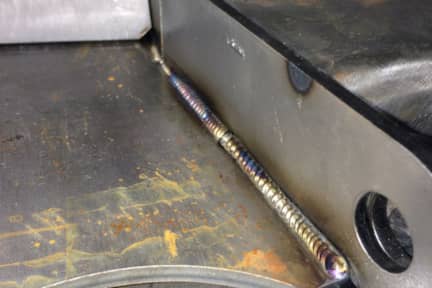 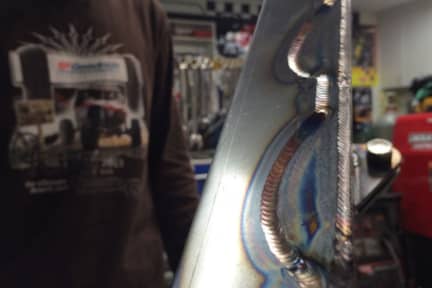 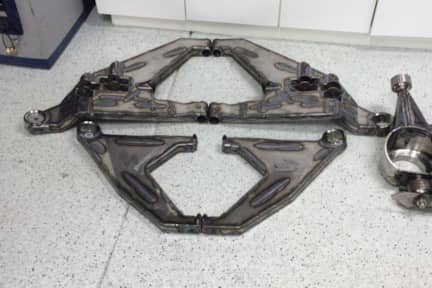 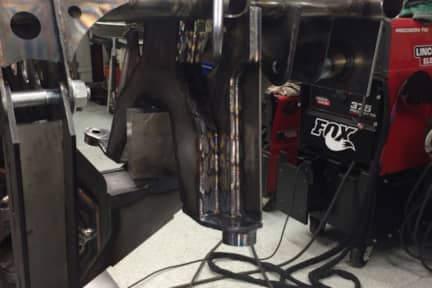 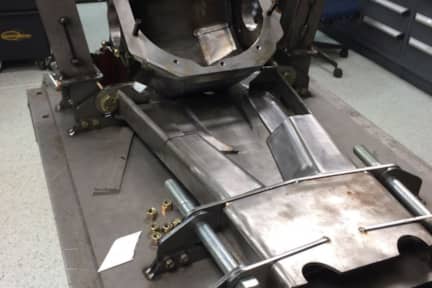 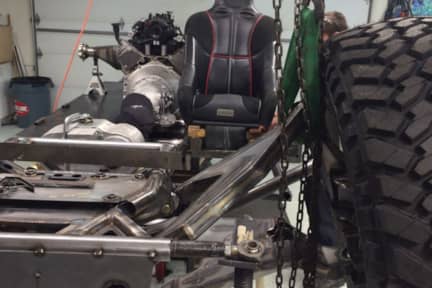 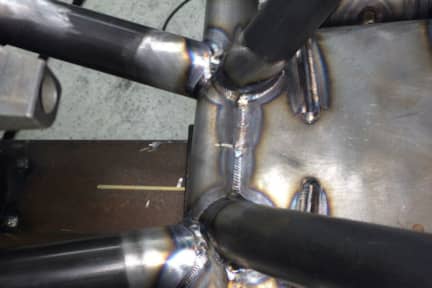 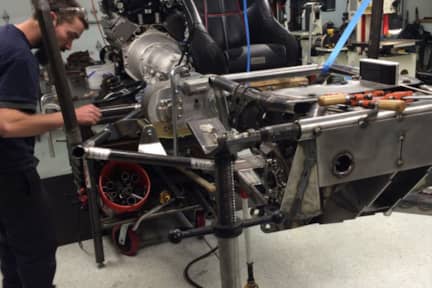 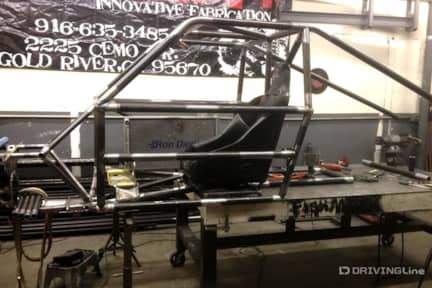 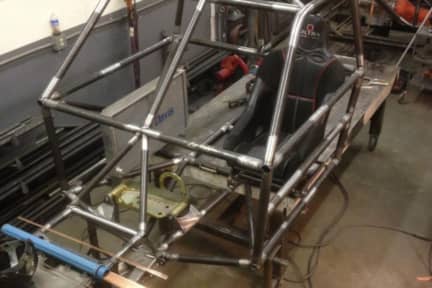 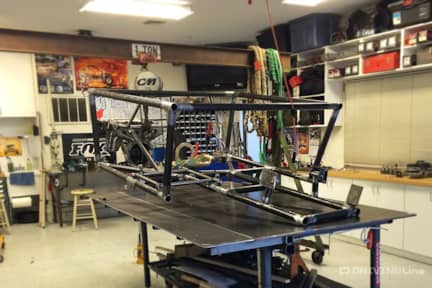 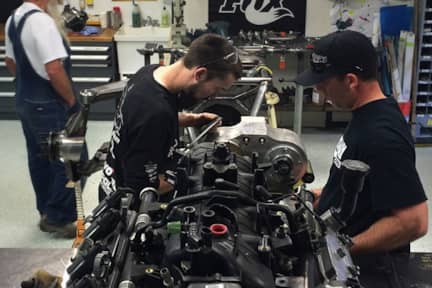 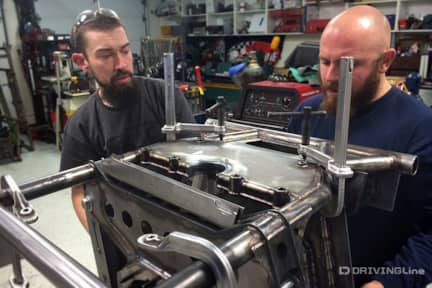 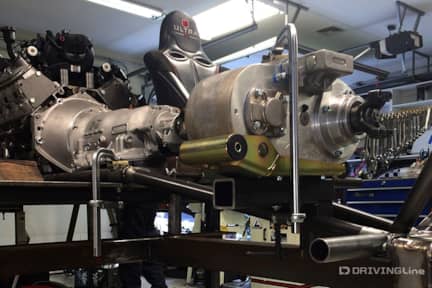 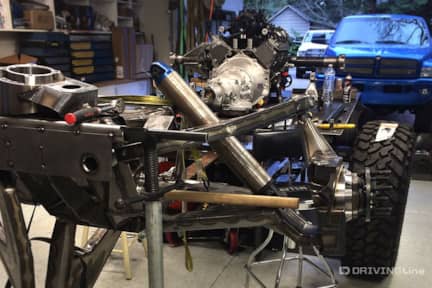 Jason Scherer is best known for his driving prowess, and for good reason.  In addition to winning the 2009 Griffin King of the Hammers Presented by Nitto Tire, Jason has plenty of other trophies on his mantle.  His most recent victory was at the Ultra4 Nitto Tire Nationals last fall, piloting a single seat, IFS buggy built by Tribe 4x4.  While Jason won the ’09 King of the Hammers in a more traditional Jeep-like buggy built by Campbell Enterprises and heavily modified by Shaffer’s Off Road, he raced one of Lance Clifford’s Fishmouth Fabworks-built IFS buggies in the 2014 King of the Hammers. Prior to the advent of King of the Hammers, Scherer was a successful rockcrawling competitor behind the wheel of the Jon Nelson-built "Tiny," arguably the most revolutionary rockcrawler ever constructed.  We mention all of this as prologue to Jason’s current endeavor, which takes design cues from all of those past vehicles in an effort to be the most capable Ultra4 car yet.  And this time Jason is taking the lead in the building process instead of leaving it to someone else.  “Our mantra around here is light, low, and balanced,” Jason explained. Unlike most traditional motorsports, off-road racing leaves the door wide open for innovation.  Front engine?  Rear engine?  IFS?  Solid axles?  All are fair game in King of the Hammers so before Jason could fire up the welder he had to decide how he wanted to lay out his new car.  In an unprecedented move, Jason opened up his shop to Driving Line for an exclusive interview where he discussed not only the choices he made, but the reasons behind them as well.  As you will see, none of them were arbitrary.

The debate about which is better for King of the Hammers, a solid front axle or IFS, is the most hotly contested subject regarding the hardware used in Ultra4.  Solid axles have won 5 of the 7 King of the Hammers, but Jason feels those statistics are skewed.  “There are ten times as many solid axle cars in the field, so naturally they should have more wins,” he notes.  While Jason won KOH in a solid axle car, he feels that IFS is the best choice at this time. “The packaging is so much better with independent suspension,” he shares.  “Instead of the engine and chassis all being above the axle with enough room for uptravel, the differential is fixed so you can put everything lower in the car.”  He also explains that not all IFS are created equal.  The front suspension on his new car provides 40 degrees of steering angle and uses angled lower control arms to maximize ground clearance, all while cycling nearly 20 inches of wheel travel with Fox 2 ½-inch diameter coilovers and huge 3 ½-inch 7 tube bypass shocks.

By mounting the Spidertrax IFS differential rigidly to the chassis, packaging requires the engine to be placed in the back.  Jason has traditionally used stock GM LS7 crate engines in the past, but this time he wanted more power.  “It is frustrating when you catch someone in the corners only to have them pull away from you on a straight away because they have more power,” Jason admitted.  “Now that will not be an issue.”  Jason collaborated with Kevin Stearns at Pacific Fabrication on a new LS-based engine that features a custom camshaft, ported heads, and big displacement to provide the power Jason needs to be competitive in Ultra4 racing.  “This engine is amazing,” he noted.  “It makes nearly 600 horsepower to the wheels and the torque peak is 1000 RPM lower than the engine it is replacing, so the power is very useable.” The all-aluminum V8 routes power to a Reid Racing Super Hydra 400 transmission with 300M internals and a Powerglide output.  “The transmission is a 2WD and uses a slip yoke output to a divorced Atlas transfer case.  This makes it so much easier to remove the transmission between races,” Jason explains.  He went on to stress how important it is to thoroughly prep the transmission between races.  “If it is too hard to get the tranny out of the car, you are likely to skip the necessary prep.  I have experienced enough back luck in the past, when I show up to race I want to be confident that my equipment is ready to help me win.”

Jason’s last car was a single seat design, and he retained that for his new buggy.  We asked Jason if he was concerned about the lack of a navigator, after several racers missed portions of the course at the 2014 King of the Hammers.  “I am very familiar with Johnson Valley,” he asserted.  “I spend the whole week before the race doing my homework; pre-running, taking notes, learning the lines.  That is just part of the program when you drive solo.”  Rather than being a burden, Jason views the lack of a co-driver as a benefit that allows him to push harder and drive faster.  “I hold back when there is someone else in the car with me,” he confessed.  “I worry about their safety if something was to go wrong.  We built the new chassis to be wider with extra door bars to ensure my safety, and now I am the only one we have to be concerned with keeping safe.” A reoccurring theme, packaging was an issue with the decision to build a single seater.  “Most Ultra4 cars put the radiator and coolers behind the cockpit, but they don’t run a windshield.  As a result the cockpit is like a big parachute that limits top speed and causes a significant amount of lift and instability at triple digit speeds.”  Instead, the coolers are all mounted next to Jason in the chassis where they are exposed to airflow without being above the centerline of the car.  “This is not only better for aerodynamics, but lowers the center of gravity as well.”

Click here to read the next in The Gavel's build series here on DrivingLine.com.

The Gavel Comes to Life